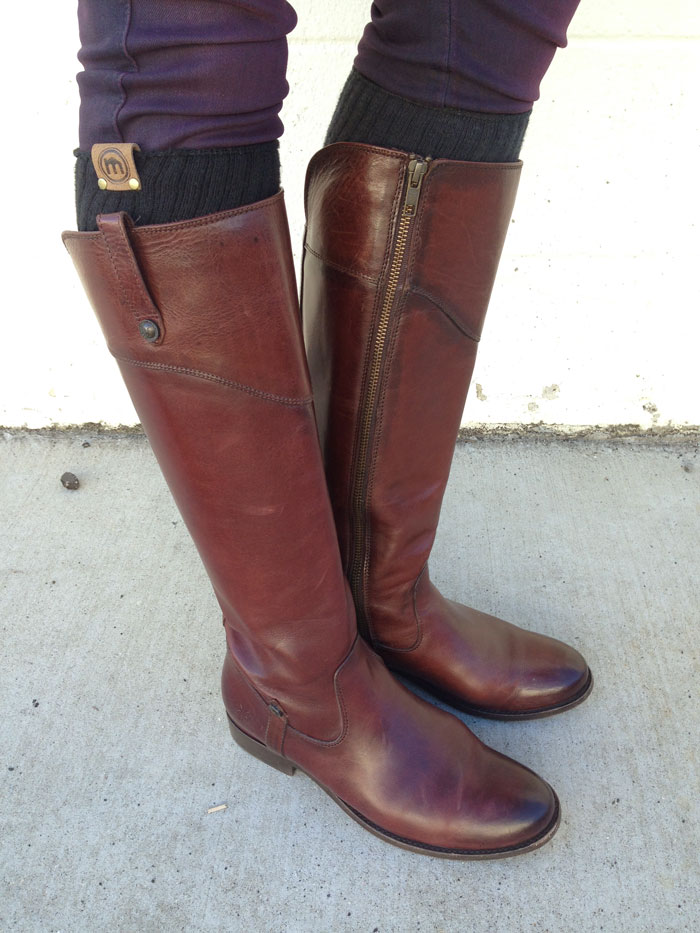 If you’ve been following my blog scribblings for awhile now, I’m sure you are familiar with the fact that I’m a huge fan of eBay shopping! I have nothing against retail, but if you can find the same item either new or slightly used for a much lower price, why not? I have so much fun browsing for bargains, and a lot of the normally pricey items I own I found after hours of tedious (but totally worth it) research and digging. I am also a huge believer of paying a little more for goods that are going to last you for years and years on end, rather than catering to the fast-fashion market by buying cheap items that you’ll have to replace every year anyway (and thus end up paying more in the long run along with generating unnecessary waste).

Several of my nice bags from Coach, Marc Jacobs, Foley & Corinna and Lucky Brand I acquired this way, and due to the quality, you can barely even tell any of them were taken out by their previous owners at all. My next conquest was to replace a pair of fairly cheap, flat-heeled brown polyurethane riding boots I got from Victoria’s Secret awhile ago. I barely even wore them out (probably 10 times or so over the last few years) and the fake leather was already starting to crack and peel. I decided to go on a hunt for a pair of nice leather boots, preferably by the one and only The Frye Company. So, I did my research on all the different types that they have to offer, and familiarized myself with the pros and cons of each through reviews on blogs and retail sites. I settled on the Melissa boot, both for its minimal (but vibrant and timeless) style and function. Then the eBay hunt began!

Initially, I was searching for any type of the Melissa boot. The three I had my sights on were either the Melissa Button Boot, Melissa Button Back Zip, or the Melissa Tab Tall. The Melissa Button Boot is a classic riding boot that slips on, with no zipper. I liked the idea, but I like the convenience of a zipper, and I like my boots to be a bit more form fitting. Reviews were saying that the ankle stretches out a bit over time as you pull them on and off, although they were still possibly Frye’s most popular, beloved boot. The Melissa Button Back Zip was my next choice, and when I started checking out reviews, I noticed some were concerned about the zipper breaking on occasion. It didn’t sway me from deciding on a zippered style, however. The Button Back has a tab with a snap on the back that buttons over the top of the zipper after you zip them up, and some were saying that it would become unsnapped every time they’d cross and uncross their legs. I decided I could deal with that, but I kept looking out of curiosity because when you’re investing in a long-term investment like these, it definitely cannot hurt to be picky! The Melissa Tab Tall won me completely over. It has no snaps and a zipper on the inside of the leg. It looks a lot more like the Melissa Button, but with a zip! For those with short calves, it has a cutaway on the back for comfort when bending your knees. This one was my final choice, but now it was time to settle on a color.

All of Frye’s boot colors are simply gorgeous. I thought I liked the orangish brown Cognac at first, but wanted something a bit darker. Dark brown was cool, but I wanted something lighter. Brown was great, until I saw the beautiful Redwood. It has lights and darks as a vintage leather piece would, with a vibrant, reddish brown hue. Sold! However, knowing how specific my tastes are, I wasn’t holding my breath trying to find it cheaper than its $428 price tag, as it appeared to be a popular color. I get a little overly determined sometimes when I search eBay, and don’t often take my first, second or even third search as the final determination of available options as I try different keyword combinations over and over. I lucked out…a store was selling the Melissa Tab Tall Boot in Redwood as a restock for $160, and I jumped on that without any more thought! They had only been worn a few times before being returned by the previous customer. Yesssss, this is how you do it!

I had also eyed the Melissa Harness boot, which simply is as it sounds, the classic Melissa with a harness around the front and back of the ankle. The Phillip Riding Boot is also a nice clean riding boot with a cute strap and buckle around the ankles and back behind the calves but is made for thinner calves, and mine are a bit muscular. The Anna boots were another brief consideration but I decided they looked a bit too simplistic (and a bit dressy) for me, and I wanted something a little beefier. So, I decided to just stick with my choice with the Melissa Tab Tall in Redwood, and I am so glad I did!

When I got them, I was completely enamored by the look, feel and everything. They have an amazingly beautiful vintage, antique look with a modern appeal! They are casual but nice enough to wear with a dressy outfit! However, I became a little obsessed with reading up on Frye sizing, since they were pretty snug with the thick warm socks I wanted to wear them with. I just have pretty wide feet, as you probably can see, and these seemed narrow at first. Many people said to size up, even though Frye is said all around to be true to size. Many people assured that they will stretch and conform to your foot though, as long as they aren’t cutting off circulation…they are leather, after all. Just wearing them around the house for a little while showed the latter advice to be true, and even after wearing them out to work all day just twice (with no pain), they have softened up considerably and now are my favorite boots I have ever tried! I definitely recommend Frye to anyone who is looking for a boot that is going to last them through time and the elements…all the hype is true! I also love that Frye never discontinues anything, so if you are currently eyeing a certain style and saving up to make it yours, you can relax knowing it will always be there for you. 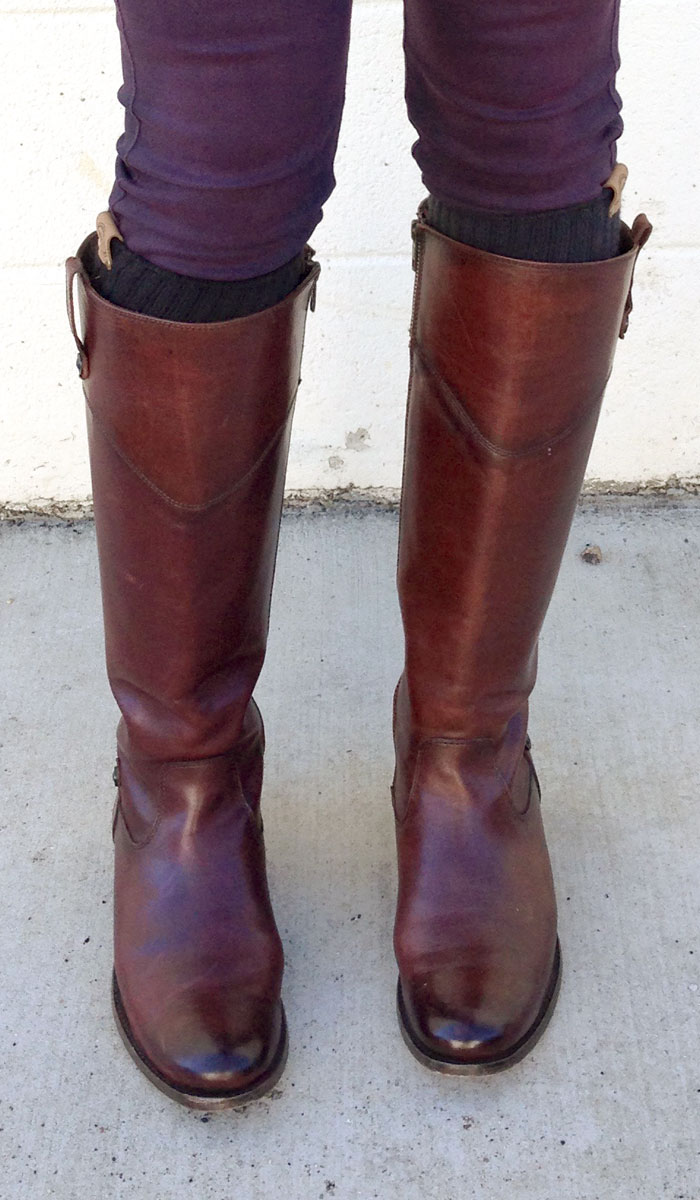 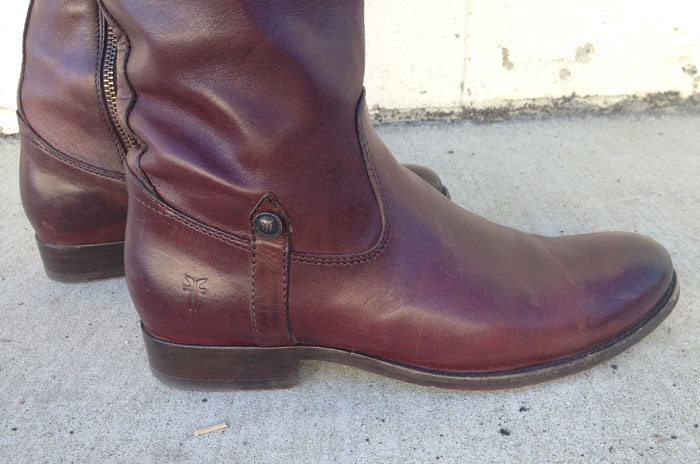 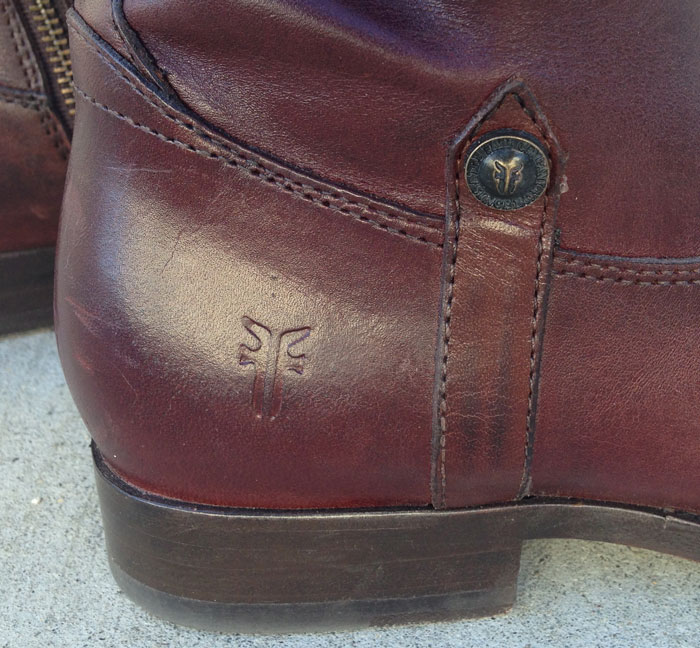 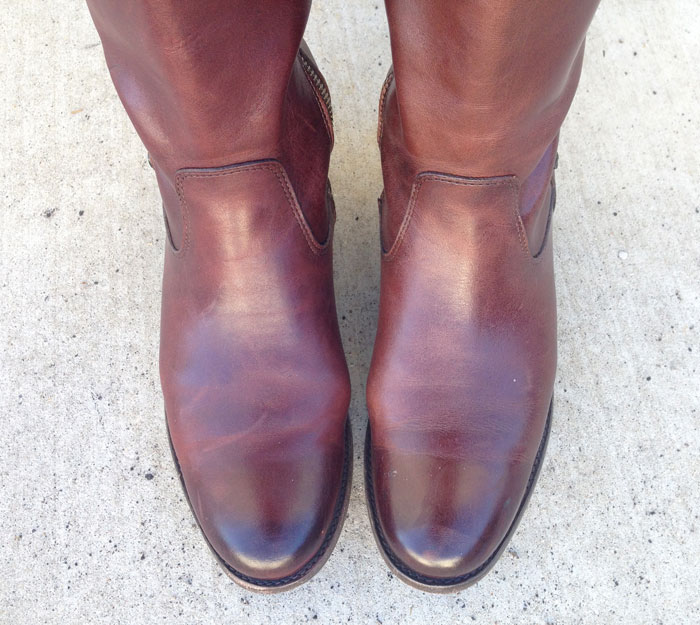 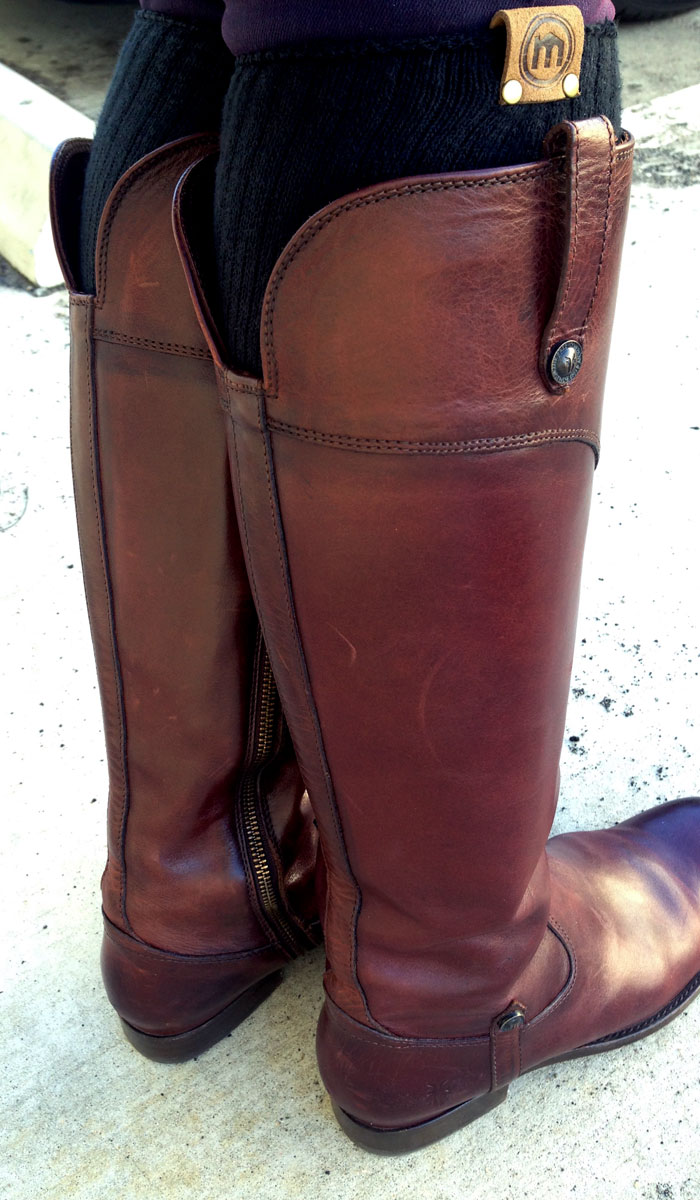 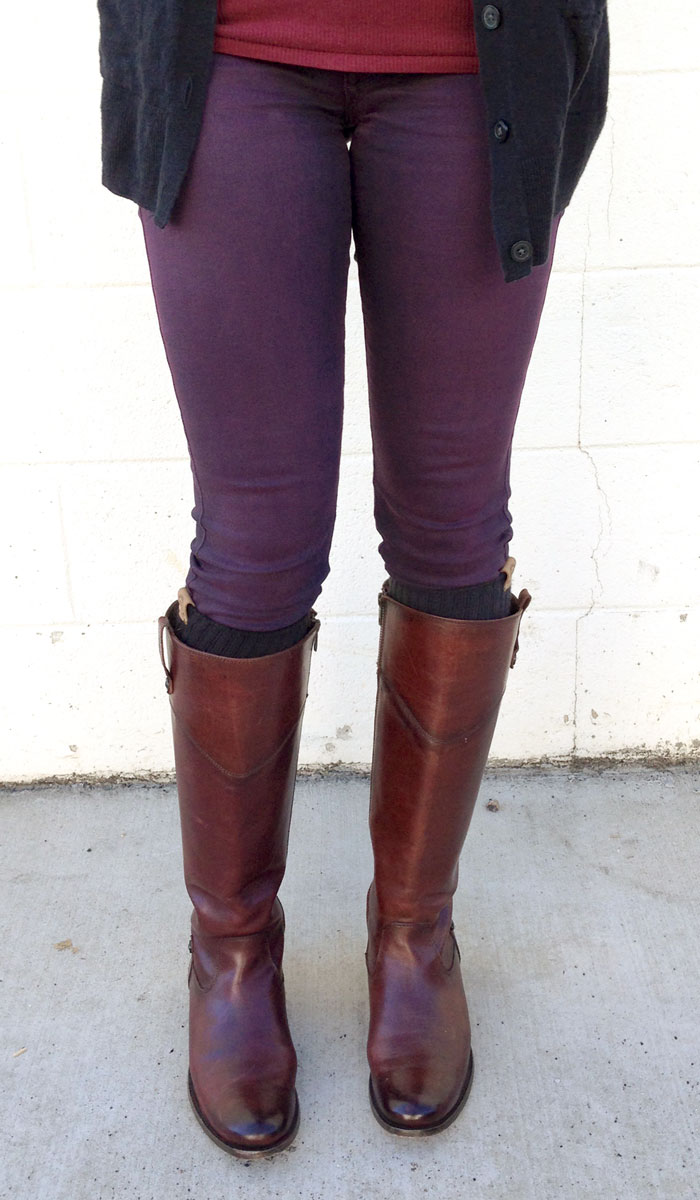 If you are drooling over the pair I have here and want to skip the time-consuming eBay scouring, you can get them either on Amazon here or DSW here.

I am also wearing these with my favorite boot socks from Mitscoots! Check out a post I did about them and their philanthropic efforts to help and employ the homeless here.

Here are other Frye styles I had been eyeing, and some that I also consider just as beautiful!