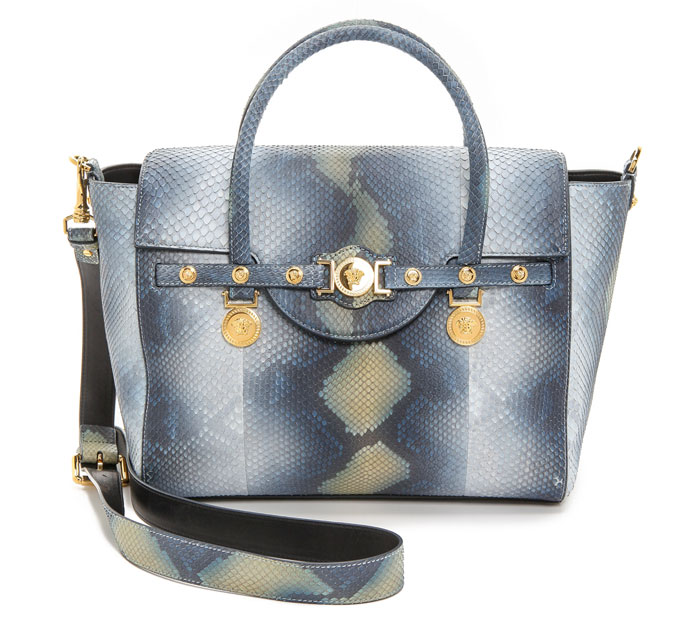 Just to make things clear, I normally loathe snakeskin. I find it gaudy and tacky most of the time, and I especially distaste items created with real snakeskin. However, then there’s the side of me that goes, well if the rest of the snake was consumed somehow, why not? So I’m going to go with that way of thinking for now, because this bag just keeps popping up at me thanks to the magical marketing powers of the internet that keeps reminding me of the one time I clicked on it out of curiosity. But damn, isn’t it pretty? Yes, it’s Versace, so yes it’s ridiculously expensive, but why act surprised and complain about such things when we already know that’s how high couture goes. Lets just admire it, like an art form…as I am now. I love those colors, and how the diamond pattern of the snakeskin goes right down the middle like that. I would be pretty cool to see and feel this bag in person. The detailing is impeccable, which is stating the obvious to anyone who knows that’s why these high fashion brands have such inflated price tags. They do sell, and fast. In fact, Shopbop only has one of these left.

So out of curiosity, I thought I’d see what else there is out there in the world of snakeskin (print, to be exact…since I’d normally like to stay as far away as any animal skin other than leather as possible). Every now and then I like to re-evaluate my tastes or distastes, because I just love finding creative pieces that break expectations I have. Here’s a few items that I find rather pretty in snakeskin print, probably because they are a bit more subtle, and mixed with other textures and colors.

When you want to keep going all day but your body

I'm going up, up, up and awayyy! Getting more comf

Got back to the Smith machine yesterday for lunges

I've been listing like crazy on Poshmark lately! I

When you feel like throwing in the towel...time wi

Great times hanging with my friends at @ignitefire

Good friends are so needed through these hard time